January 21, 2019 – If you are passionate about architecture, community, construction, St Louis, modern design and office dogs…. We want to talk to you.

UIC (Urban Improvement Company) is an integrated practice with expertise in architecture, construction, home building, carpentry and real estate development. UIC was founded by architects with a belief that design should be at the forefront of what our company is and seeks to be. While we operate at a variety of scales and project types, maintaining a consistent quality in design is central to our brand and our continued success. In fact, our core focus is to “Make cool stuff that builds community(ies).

As a design-centered company, it is critical to embrace the uniqueness that comes from unbridled creativity and boundless curiosity. At the same time, the discipline to be deliberately weird when called for, and practically-minded along the way to getting there energizes our process with a synergy around our three core values:

A Design Architect is accountable for ensuring the work performed meets the standards set by the project architect and design principal. You will collaborate with Project Architects and the Design Principal to effectively complete multiple design iterations, proposals, presentations, drawing issues, and will be involved in the day to day architectural functions in all phases of project delivery (Master Planning through Construction Administration). Accountability for organizing your time to meet the deadlines and finishing tasks set by supervisor is paramount.  – There is a lot of opportunity for growth in this position.

A Project Architect (PA) is a senior position in UIC and integral in leading the progress, drawing, and coordination of projects from start to finish. You will collaborate with other UIC business units, project managers and field staff to fully utilize and continue to improve the integrated practice model. As a Project Architect you will guide workflow and Design Architects to assure timely delivery of design, materials and documents. You will effectively complete multiple design iterations, proposals, presentations and lead all phases of project delivery. You will also assist in providing leadership, technical expertise, perform quality control and document review throughout the design process. Additionally, you will maintain good relationships with teammates, plan review officials and of course clients.
Requirements

To join our family

Please send your resume and portfolio to careers@uicstl.com.

If you have applied in the past and we didn’t reach out, now would be a great time to remind us of your continued interest in UIC.

Bonus points for identifying your favorite UIC project with your resume.

The Challenge: At 110 square feet, “the awkward, impractical layout limited the room’s functionality,” says Refine by UIC president Paige McClellan. “The tub and the vanity had been placed at 45-degree angles, creating a narrow diagonal pathway. The toilet was in the center of the room, and the shower was tucked into a small space at the back.” 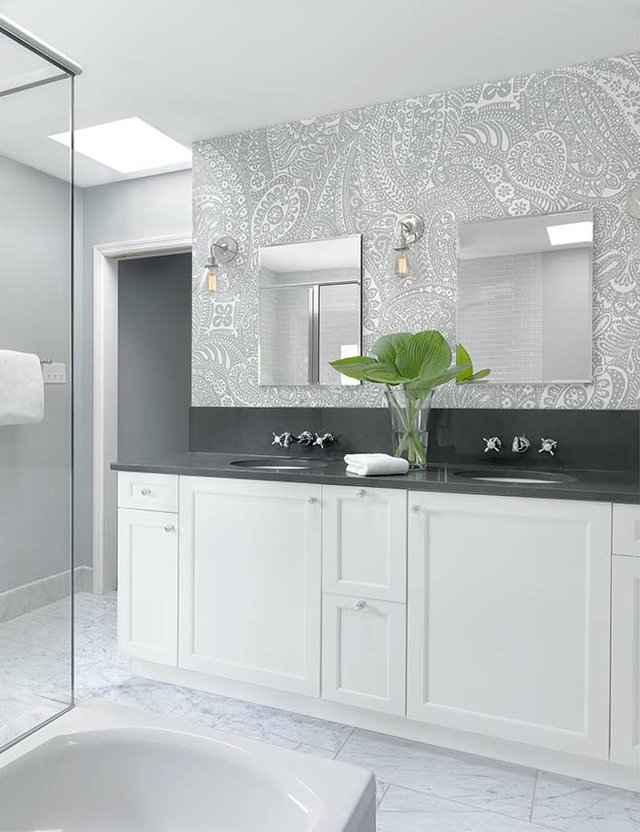 The Resolution: “Our focus was to maximize the space and not necessarily encourage the client to take on a larger footprint,” she says. A standard-size bath and glass-wall shower, tiled in a translucent white glass mini-brick, were installed where the old tub once stood. A tankless toilet sits in the space that the old shower once occupied, and a pocket door adds privacy. A paisley Schumacher wallpaper hangs above a double-basin Caesarstone counter-top with a backsplash and wall-mounted chrome fixtures.

The Homeowner’s Take: Owner Katie Manga loves the space for its improved flow and functionality, and for its new aesthetic. “Now, the bathroom ties in beautifully to the rest of the home but is still a standout,” she says. UIC has already made a huge splash in St. Louis with their out-of-the-box way of blending architecture and design to create some of the most striking contemporary businesses and homes in the city. Some of their most eye-catching projects include the former City Hospital power plant downtown transformed into a climbing gym for Climb So Ill, the pair of upscale wine bars/restaurants Olio and Elaia, City Garden Montessori school, as well as many residential homes that have been popping up in the Botanical Heights and Grove areas. The Arcus Awards are presented to companies, organizations and institutions that demonstrate exceptional commitment to leading the St. Louis region’s authentic economic strengths and championing a better tomorrow for our region. These awards recognize companies and organizations that make the St. Louis region the best place to live, work and invest. Nick and Sharon Blaine visited with UIC founders Brent Crittenden and Sarah Gibson and saw some open lots in the Grove where they could have a custom modern home built to suit their specific needs. They began building in July 2015 and moved into their new home in March 2016.

“Sarah is really envelope-pushing,” Nick says. “We knew we wanted an open, floating staircase, and she designed the stairs and unique railing. We also wanted a laundry room right off the bedroom, so she worked to customize that space as well.”

When we say the biggest projects transforming St. Louis, I think in a lot of ways it’s a collection of things coming together. NGA is an important step forward, but if you look at the impact of that on the north side of the city, and then all the intensive development, whether it’s Cortex or commercial developments and new housing that’s going on in the central corridor of the city, that sort of puts us in an interesting place in time, in a very transformational place in time. So, collectively, there are all these things coming together that are forming unique opportunities, several opportunities for us to transform the city and, hopefully, then build off of that. So what’s happening in the center part of the city, hopefully then, has an effect throughout the region in the larger city.

UIC, the design-build company best known for its transformation of the Botanical Heights, continues to build outside that original footprint. The company is proposing a custom home with first floor apartment at 4401 Gibson Avenue in Forest Park Southeast north of Manchester. The company has previously completed six homes in The Grove. Read more HERE

A local tech company that has developed a platform to match people with senior housing communities has completed a new office in Midtown Alley and plans to add 50 employees by the end of 2020.

Launched in 2014, Sherpa recently moved its 20 employees from University City to the company’s new headquarters, designed by architecture firm CDO, in a renovated building at 3030 Locust Street in St. Louis. Sherpa says it plans add 10 more employees next year. The company says fast growth in its niche is driving hiring.

Botanical Heights has been the home base of UIC (Urban Improvement Company) since 2006, when we moved our office into a former pharmacy that was about to fall over before we bought and rehabilitated it. Now, 10 years later, we are entering Phase 3 of the redevelopment plan that to date has resulted in over 40 single-family homes, 34 apartment units, the state’s top-performing City Garden Montessori charter school, award winning restaurants Olio + Elaia, Union Loafers, Old Standard, and La Patisserie Chouquette, and company headquarters for UIC, GadellNet, and SLAM! Agency. Our Phase 3 plans entail an additional 17 new single-family homes, the rehabilitation of 25 structures for apartments and commercial use, and a new company headquarters for UIC at 4140 Park Ave.

While not part of the original vision for Botanical Heights, we are excited to announce that UIC has recently acquired the building at 4140 Park Ave. At 110,000sf, 4140 Park will house an expansion of the UIC offices as well as other tenants. The four-story red brick warehouse building is part of the Liggett & Myers Historic District, and was designed by Isaac Taylor in 1896 as the Liggett & Myers Tobacco Factory. Beyond incubators and co-working offices, this new development will offer unique, scalable solutions as part of an amenity-rich, centrally-located building.

Botanical Heights is the name that replaced McRee Town, which at one point in the 1980s was one of the most eroded, failing urban neighborhoods in the nation. At the time we moved in, the eastern half of the neighborhood had recently been completely torn down and replaced with new housing by a large regional home builder. The western half was assumed to be slated for the same fate, but we preferred a different approach.

Working with the not for profit redevelopment Garden District Commission, formed by the neighboring Missouri Botanical Garden, we forged a new plan that stabilized the existing building stock and moved forward with an ambitious plan for historic rehabilitation and infill building that has created a walkable, sustainable, mixed use neighborhood. To date, UIC has guided over $15 million in investments in the neighborhood, with another $10 million slated for the coming two years.

The neighborhood has received local and national praise for both the speed and quality of the redevelopment. By working within the context of this long neglected 100-year old neighborhood we have been able to foster a rebirth with the density, amenities, and charm that make city neighborhoods great places to live and work.

UIC is a design-focused integrated practice with expertise in architecture, home building, urban design, real estate development, general contracting, and carpentry. Through critical engagement with urban context, UIC has brought its diverse expertise and intelligence to a wide range of individual projects and neighborhood developments.